Texas does not allow a pre-death (Antemortem) will contest. 254 sw2 862. As long as the testator is alive, Texas considers his will changeable and therefore, a will contest would be a waste of time. However, a few states allow pre-death will contest including Ohio, Arkansas, North Dakota, and Alaska. A few states like New Jersey are considering allowing them.

Will Sleeth, an attorney in Williamsburg, Va wrote an article about pre-death will contest. He explained what it is:

While the antemortem probate schemes vary by state, in general, they permit a testator to seek a ruling from the court (while he is still alive) that his will is legally valid…

Proponents of antemortem probate point to several benefits to the practice, including: it provides for certainty and avoids family disputes after death, it ensures that the testator can testify in favor of the will (a practice that he obviously could not do after he dies), and it discourages challenges to a will because if a person opposes the validity of the will while the testator is alive, that person would almost certainly be cut off by the testator (an(d) (he) may be fully disinherited in a later will, if he was not already).

Mr. Sleeth goes on to state that he believes the practice is detrimental. He list 10 reason not to allow pre-death will contest:

Can you replace pages in your will? 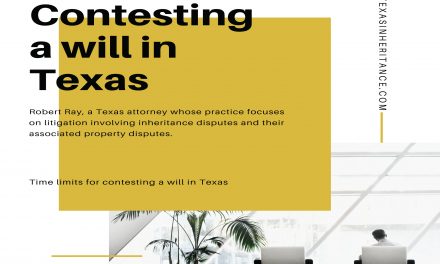 Podcast – Time limits for contesting a will in Texas

Is There an Attorney Client Privilege in a Will Contest?