Credible Witnesses To A Will. 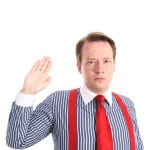 What are credible witnesses?

How do you prove that the witnesses are credible witnesses?

According to the court, where the will is admitted into evidence and it provides no pecuniary benefit to the witnesses, the will itself constitutes some evidence that the witnesses are credible to attest the will at the time the will was executed.

Do You Have a Right to a Jury Trial in a Will Contest?