In a recent Texas inheritance dispute out of the Fort Worth Court of Appeals, In the Estate of Larry Ronald Neal, Deceased, No. 02-16-00381-CV, (Tex. App. –Fort Worth, Delivered: November 9, 2017), the question was what did the testator mean in his will. The will stated that the beneficiary (a niece) would receive “all my personal effects and all my tangible personal property, including automobiles, hangars, aircraft, fly-drive vehicles, patents, companies, and all other things owned by me at the time of my death, including cash on hand in bank accounts in my own name, or companies[`] names, or securities, or other intangibles.”

The testator’s children asked the court to declare that he died intestate as to his real property since it was not mentioned in the will. The niece claimed that the phrase “and all other things owned by me at the time of my death” was meant to include the real estate. The executor who supported the niece’s position and the niece claimed that several tenants of Texas law applied. They claim that Texas requires that wills be construed so that the testator did not die intestate if at all possible. The appeals court said that presumption fails when the testator “through design or otherwise, has failed to dispose of his entire estate.” The court said that it is clear that the testator intended to dispose of only his personal property. The court cited cases declining to apply the presumption when the will did not dispose of the decedent’s entire estate.

The executor and the niece next turned to a following article in the will that said “Granting the Independent Executor power to sell, convey[,] or distribute real property clearly indicates [Larry] intended real property to pass” under the will.” The appeals court disagreed. “First, the law permits an independent executor in circumstances such as these to exercise control over real property even when that property passes through intestacy.” and “Second, and perhaps more importantly, (testator’s) reference to “real or personal” property in Article IV confirms that he knew the difference between those two types of property—indeed, he distinguished real from personal property three times in Article IV—and that he referred to both when intending to do so. In that regard, Article IV weighs against (executor’s) proposed interpretation of the will.”

The language in a will needs to be precise. We don’t prepare wills or trusts but you should see a competent lawyer when you want to prepare a will. 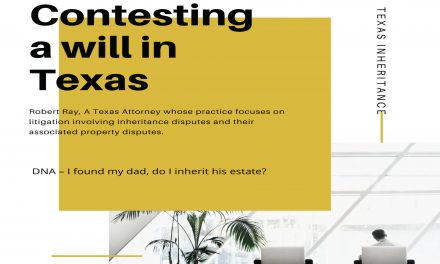 Podcast “DNA – I found my dad, do I inherit his estate?”

When is a will effective?

Necessary Parties To Will Contest