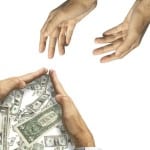 In what I consider a strange holding, the Texas Supreme Court ruled in 2015 that when a Texas bank gives money to wrong person, the bank may not be liable.

last of husband or wife died. When the bank heard that the husband died, they issued a check to the two pay on death beneficiaries instead of leaving the money in the account under the wife’s name. One of the pay on death beneficiaries (first) kept the money. The other one (second) put the money into an account for the wife. He also had a power of attorney for wife and demanded that the bank reimburse the wife for the money that had gone to the first one. The bank admitted the mistake and attempted, unsuccessfully, to get the money back from the first one. After the wife died, the executor of her estate (second) filed suit against the bank.

A jury found that the bank breached its duty to wife but found that the wife suffered no damages. The trial court entered a judgment against the bank for the full amount given to the first one, called judgment notwithstanding the verdict, JNOV. The court of appeals upheld the judge’s JNOV. However, when the case went to the supreme court, they overturned it. The supreme court ruled that the estate suffered no damage because the one half of the original account would have gone to the first one if no changes had been made! This doesn’t address the issue of what would happen if the wife had all the money and decided to spend it or to put it into another account (as she had done after the funds were disbursed.) I don’t understand how the bank is not liable for giving depositor’s money away. There was no discussion of any constraint on the wife to use that money, to give it to someone else or to just go to Las Vegas and blow it. It was wife’s money! How could giving it to someone else not cause damages!

The only way to justify this case is that the two pay on death beneficiaries were not relatives of the husband and wife and that if the bank had paid the money back to wife, it would have ended up in the account opened by the second beneficiary after the fact and he would get all of the money. There is no discussion of these issues or what the wife’s wishes were. There is a brief mention of a guardian for wife but not discussion of what wife wanted done with the money.

Non Probate Assets Financial accounts like checking accounts, savings accounts, C.D.’s and retirement accounts are non probate assets. That means that a person’s will does not control who gets the funds. The...

In Developing Countries, Lack of Inheritance Rights for Women May Depress the Country’s Economy

In a posting on the World Bank’s blog, there is an article that points out that wives and daughters don’t have the same inheritance rights as husbands and sons in developing countries. In those countries, ownership...

Does a Bank Have to Return Money to an Estate that it Let the Wrong Person Withdraw?

In two recent cases in the San Antonio area, the Texas Supreme Court was asked to decide if two banks were required to return money to an estate that the banks had paid out to a person with fraudulent papers. The facts were that...